“This will be the most comprehensive exploration program at our Eureka Project in many years. In 2020 we demonstrated that there are many high-grade gold intercepts, both inside the existing resource and beyond its limits, that can add significant value to our flagship project. Timberline’s Carlin-type gold resource at surface with oxide mineralization provides a strong foundation for resource expansion, but the best growth potential at Eureka is from higher grade gold associated with the many under-drilled targets across the property,” commented Timberline’s President and CEO Patrick Highsmith. He continued, “Our fully-funded drill program will follow-up on higher-grade, drill-indicated gold at the Water Well Zone, South Eureka, Rocky Canyon, and Oswego targets. We strongly believe that additional untested targets will confirm the true district-scale potential of Eureka. These include new geophysical and geological targets, plus the obvious potential around the historical Windfall Mines.”

The Timberline team has significantly advanced its three-dimensional understanding of the Lookout Trend and its relationship with the Graben Zone to the east (Figure 2). This corridor contains the existing Lookout Mountain resource, and it hosts multiple generations of major faulting. The western bounding structure in the area is the Lookout Mountain Fault (LMF), a steeply-dipping Basin-and-Range fault. Much of the Lookout Mountain gold resource is associated with a significant alteration zone and related collapse brecciation along the east-dipping Footwall Fault. East of that structure, numerous high-angle faults cut the graben and some may be related to known gold mineralization discovered by Timberline in the Water Well Zone (see Company news releases dated April 20, 2015 and January 7, 2021). 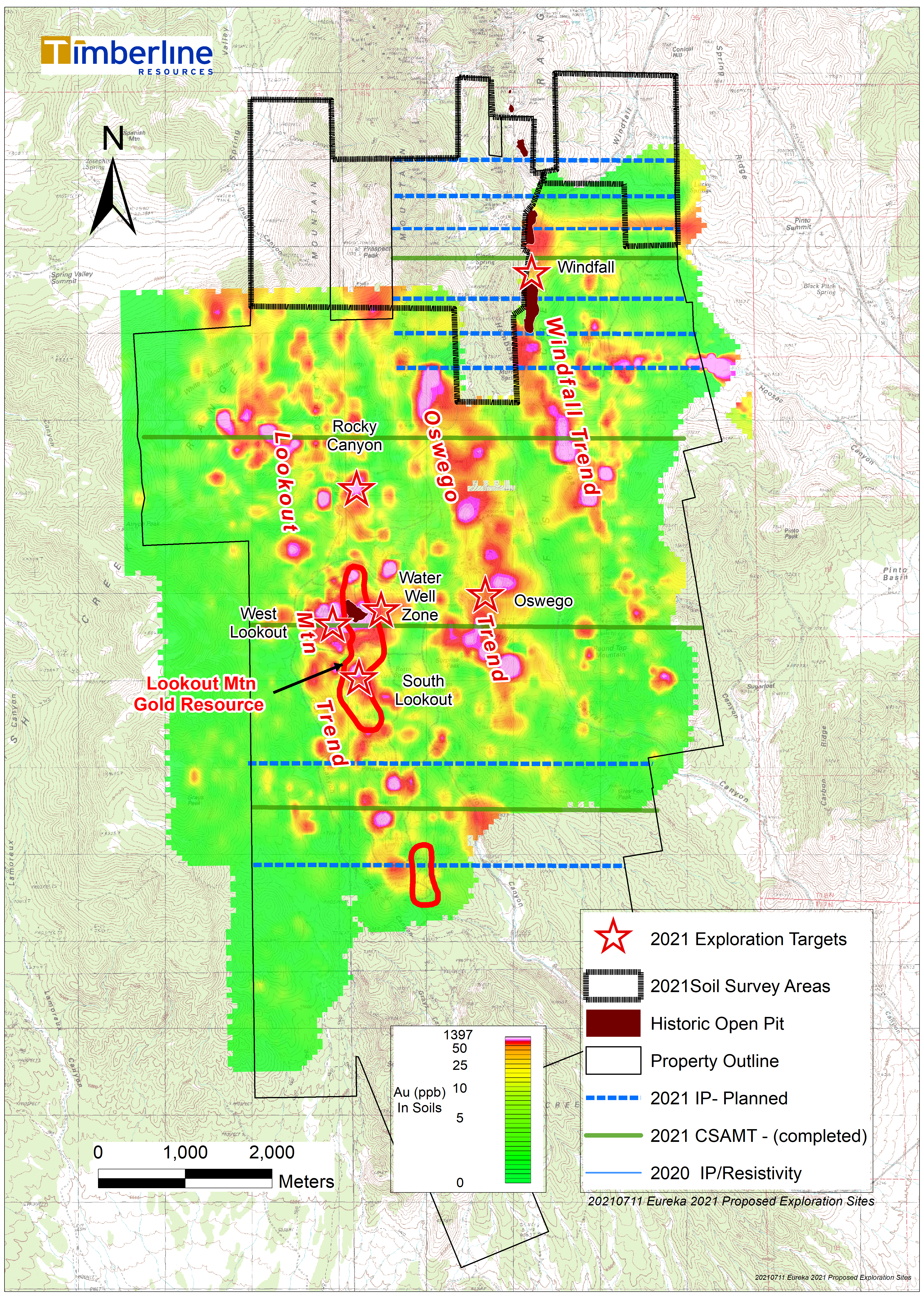 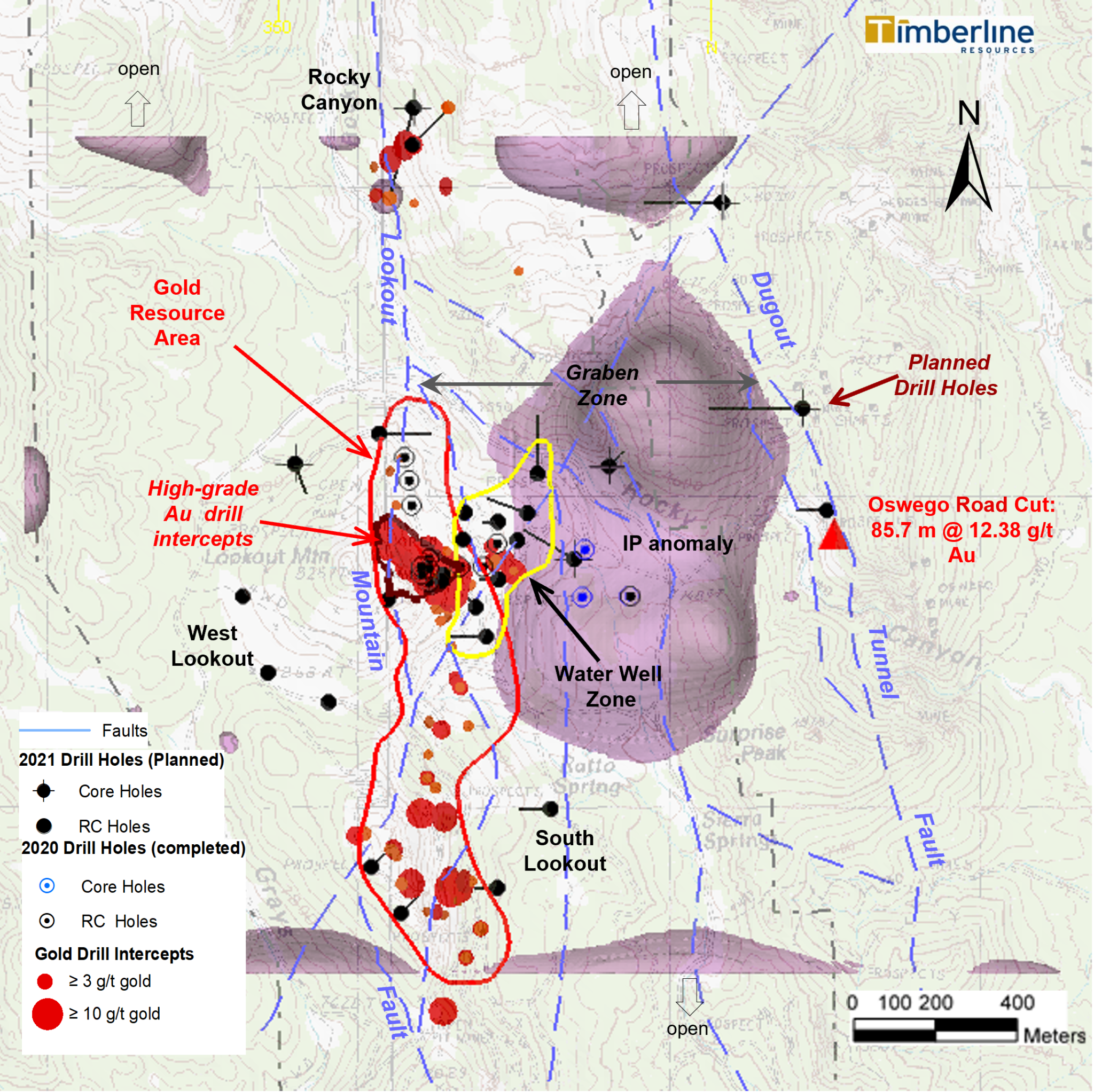 The area in and around the Water Well Zone will see much of the focus of the 2021 drilling and includes an area covering approximately 500m by 200m (shown in yellow in Figure 2). This target area also includes step-outs from higher-grade intercepts in the southeastern portion of the resource and outside the existing resource. A newly interpreted northeast striking fault also cuts the target zone and may be responsible for offsetting high-grade gold.

The central Graben Zone hosts a 2 km-long strong IP (chargeability) anomaly near its central axis (Figure 2). The IP anomaly was partially confirmed by the core holes drilled in the area at the end of the 2020 drill program, in which significant pyrite, graphite, and low levels of gold and silver were encountered (see Company news release dated March 25, 2021). Company geologists are confident that only the periphery of the geophysical anomaly was tested during the 2020 program. This year, a combination of core and RC holes are directed into several parts of the IP anomaly.

The eastern side of the graben is marked by the steeply dipping Dugout Tunnel Fault (DTF), another Basin-and-Range related structure. The historic Oswego showing (Figure 2) is near the DTF, and it includes high-grade historic sampling (85.7m at 12.38 g/t Au), as reported in Company news release dated June 12, 2018 along a roadcut and historic workings as well as early 1990s-vintage drilling. New mapping, sampling, and three-dimensional analysis of the Oswego Target have resulted in several new targets to be tested in Timberline’s first-ever drilling at Oswego.

Timberline will also return to the South Lookout Target for the first time in several years. Drilling in that area will test for extensions of historic high-grade intercepts within and to the east of the southern part of the resource.

Stepping away from the known resource areas, drill targets have also been developed in the younger Devonian rocks at West Lookout and Rocky Canyon. Similar Devonian rocks host Carlin-type gold mineralization at the Gold Bar Mine farther north on the Battle Mountain Eureka Trend. Previous operators of the Eureka Project have drilled notable mineralization at these western and northern targets.

Importantly, the CSAMT survey includes a line over the major IP anomaly in the Graben Zone east of the Lookout Mountain Resource (see Company news release dated February 3, 2021). The new data will help resolve the structures and extent of that feature in order to fine tune the drill testing planned for 2021.

Zonge is also scheduled to begin a new 29 line-kilometer IP survey in mid-July.  The IP survey will build on the very successful IP survey conducted during late 2020 and will include multiple lines in the Windfall target area (Figure 1). As shown in Figure 2, the Graben Zone is host to a major IP anomaly that indicates a large volume of chargeable rocks underpinning the resource as well as highlighting various faults cutting through the area. These chargeable rocks are suggestive of the presence of sulfide minerals and organic carbon.

Timberline has also initiated a soil geochemical survey designed to augment the existing geochemical coverage (Figure 1). The gold systems at the Eureka Project often come to the surface where faults and altered rocks can be expressed in gold and pathfinder elements detectable in soils. New developments in analytical technology are likely to yield much more robust and comprehensive data than seen in previous surveys. Soil geochemistry is a powerful tool because it provides high-resolution data that is suitable for drill targeting.

Each of the three major trends at Eureka is reflected in the existing soils data (Figure 1), but the northern portion of the property position was never covered by previous workers. The Company aims to collect up to several thousand high-quality soil samples across the northern extents of the Lookout, Windfall and Oswego Trends. All three of the mineralized trends are known to extend beyond the extent of current drilling.

Renowned exploration geochemist Mary Doherty is assisting Timberline with the 2021 survey, including designing and executing an orientation survey that will be used to optimize sample spacing, sample preparation, and analytical methods. She is also conducting a review of the existing soil geochemistry database, which includes approximately 6,000 historic samples. Ms. Doherty will apply her extensive experience with the geochemistry of Carlin-type gold deposits in a thorough review and updated interpretation of the gold and multi-element data across the Eureka Project.

Mary Doherty is an adjunct professor of geology and geochemistry at the Colorado School of Mines and the principal of International Geochemical Consultants LLC. She was previously Chief Geochemist at Newmont Mining Corp. and Principal Geochemist at BHP World Exploration.

Steven Osterberg, Ph.D., P.G., Timberline’s Vice President Exploration, is a Qualified Person as defined by National Instrument 43-101 and has reviewed and approved the technical contents of this release. Dr. Osterberg is not independent of the Company as he is an officer.

Timberline Resources Corporation is focused on delivering high-grade Carlin-Type gold discoveries at its district-scale Eureka Project in Nevada. The Eureka Property includes the historic Lookout Mountain and Windfall mines in a total property position of approximately 24 square miles (62 square kilometers). The Lookout Mountain Resource was reported in compliance with Canadian NI 43-101 in an Updated Technical Report on the Lookout Mountain Project by Mine Development Associates, Effective March 1, 2013, filed on SEDAR April 12, 2013.

The Company is also operator of the Paiute Joint Venture Project with Nevada Gold Mines in the Battle Mountain District. These properties all lie on the prolific Battle Mountain-Eureka gold trend. Timberline also controls the Seven Troughs Project in northern Nevada, which is one of the state’s highest-grade former gold producers. Timberline controls over 43 square miles (111 square kilometers) of mineral rights in Nevada. Detailed maps and mineral resources estimates for the Eureka Project and NI 43-101 technical reports for its projects may be viewed at https://timberlineresources.co/.

On behalf of the Board of Directors,