The Company recently received assays for 54 rock samples at Oswego, which are summarized in Table 1 below. Most notably, 9 grab samples collected at approximately 20 feet spacing over a 180-foot section of road cut along a moderately east-dipping, strongly mineralized fault zone (the Road-Cut target) averaged 13.623 grams/tonne (g/t) gold. The results are consistent with historic reports of 12.38 g/t gold (0.361 ounces/ton (oz/ton)) over a 281-foot channel sample in this area. At the Geddes-Bertrand target, 4 samples graded greater than 100 g/t silver, up to a maximum of 1,625 g/t (47.4 oz/ton) silver.

The Oswego trend is the central of three parallel, north-south, gold-mineralized structural trends on the Eureka property, as shown in Figure 1. The Lookout Mountain trend, which is 1.2 km west of Oswego, hosts a NI 43-101 gold resource of 508,000 ounces indicated and 141,000 ounces inferred, which remains open to expansion, while the Windfall trend to the east hosts the historic Windfall heap-leach gold deposit and multiple exploration targets. With the recent work at Oswego, exploration targets for future drilling are now defined on all three of the trends.

Timberline’s President and CEO, Steve Osterberg commented, “Throughout the Oswego trend, the occurrence of wide-spread gold and silver mineralization in outcrop, as highlighted by the very highgrades at the Road-Cut target, indicate the existence of a robust gold system. Several rock formations on the trend are well-known as favorable hosts for large Carlin-type deposits in the region. These are truly exciting exploration targets, both at surface and to depth. Our geologic team will advance exploration of the Oswego, Lookout Mountain, and Windfall trends employing Carlin-type gold deposit models which were unavailable to the historic explorers.” 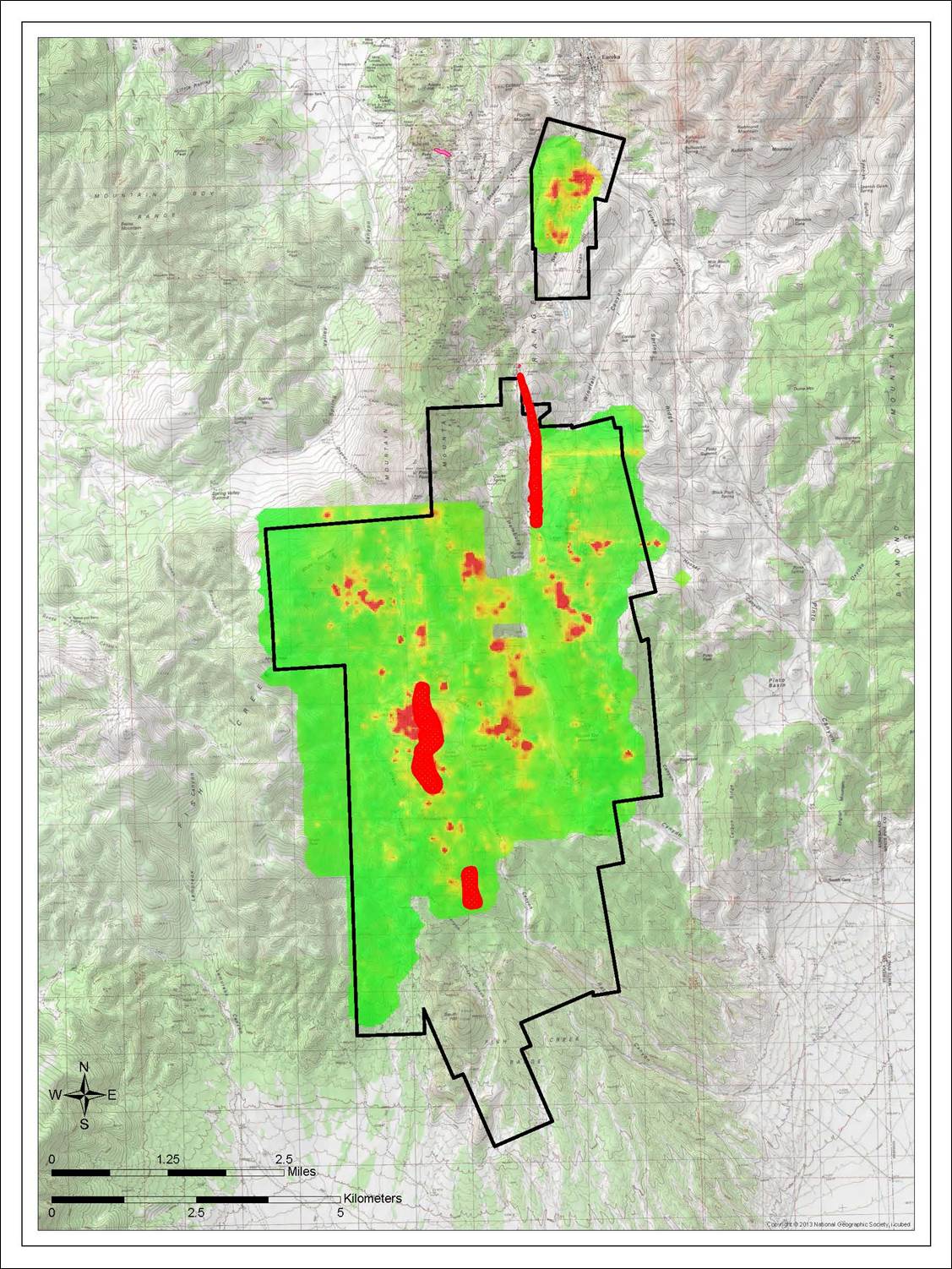 Assays from the 54 rock samples recently collected at Oswego Trend include:

Figure 2. Distribution of Gold and Silver in Rock Samples at Oswego Target Area 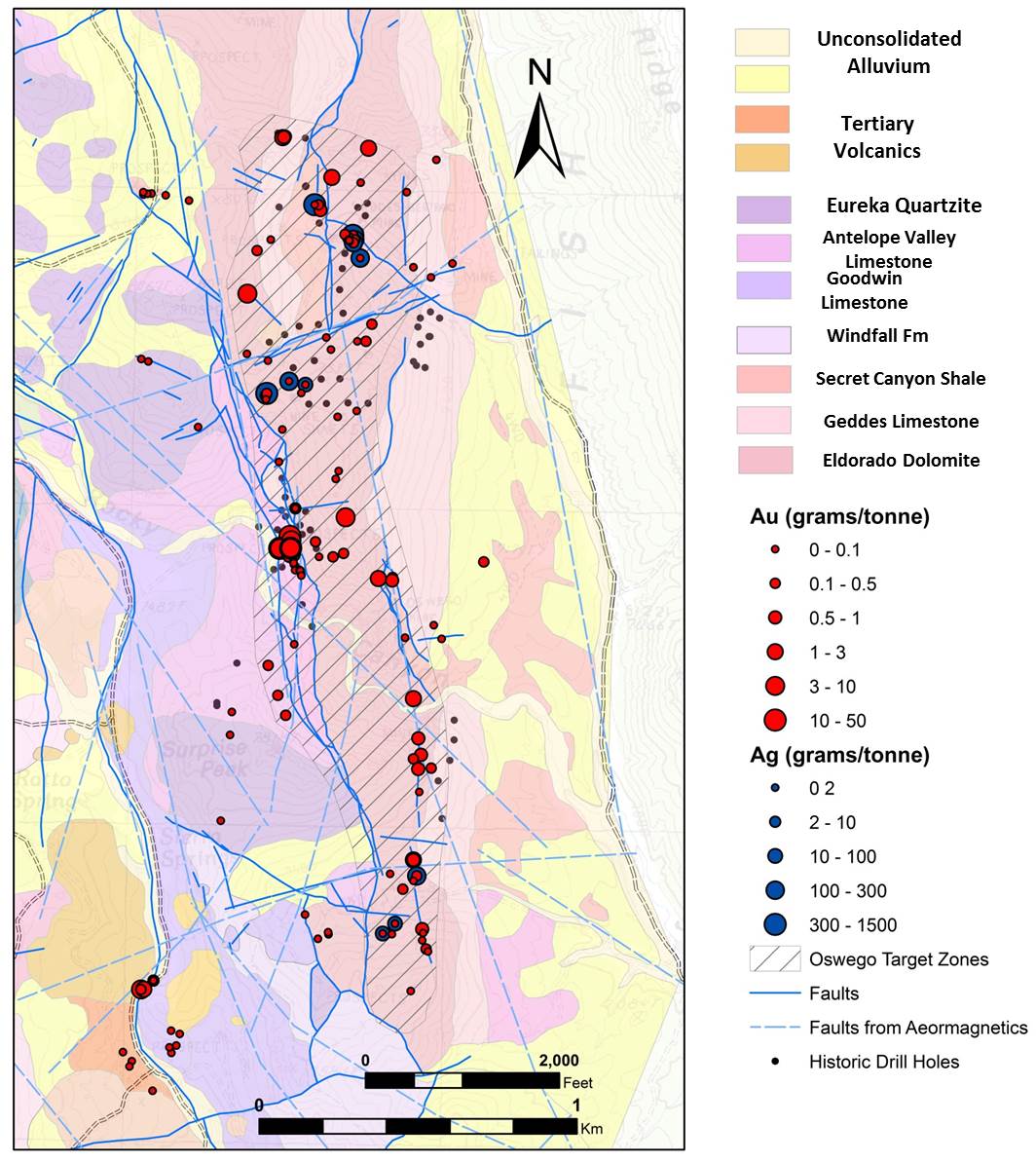 CONTROLS ON GOLD AND SILVER MINERALIZATION

Most gold and silver mineralization at Oswego occurs either along the stratigraphic contacts between the Eldorado Dolomite Formation and the Secret Canyon Shale or Geddes Limestone Formations (Figure 2), or in fractures and as silica replacement (jasperiod) along bedding planes within the formations. The highest grade assays typically coincide with the intersection of north-, northwesterly-, or northeasterly-trending faults. Widespread bleaching and/or “sanding” (leaching of carbonate matrix) is noted as well, which is commonly associated with gold-silver mineralization within the carbonate rocks.

Available historic records from the 1980’s and early 1990’s, and field review, indicate that approximately 70 shallow drill holes targeted gold along fault structures in the Oswego trend (Figure 2). Results varied widely, but included multiple intercepts which are overall consistent with the recent grab sample assays, including: 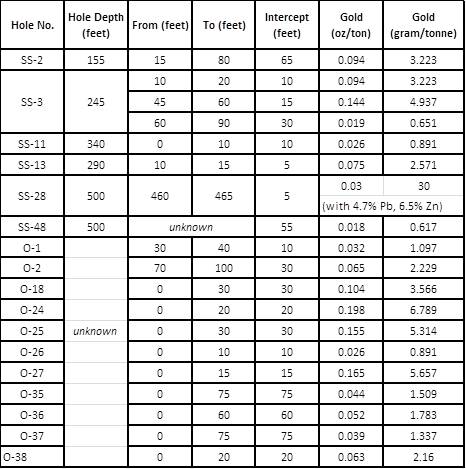 Upon completion of the compilation of new and historic geologic and drill hole data at Oswego, the Company anticipates an initial drill program later this year.

Exploration along the Oswego trend and the Oswego Road-Cut target will be integrated with and will capitalize on Timberline’s discovery experience at Lookout Mountain. The Company is also completing a comprehensive review of the nearby Lookout Mountain gold resource area and assessing opportunities for expansion of mineralization previously discovered (see https://timberlineresources.co/press-releases/, April 20, 2015), but not delineated with sufficient drill density to meet NI 43-101 modelling requirements.

Further technical details of the Company’s Eureka project project may be viewed at: https://timberlineresources.co/projects/Eureka-nevada/.

Timberline Resources Corporation is focused on advancing district-scale gold exploration and development projects in northern Nevada. These include: the 23 square mile Eureka property, comprised of the Lookout Mountain, Windfall, and Oswego areas, which lie along three parallel, north-south gold-mineralized structural stratigraphic trends; and two joint venture projects – the Paiute project joint venture with Barrick Gold, and the Elder Creek project joint venture with McEwen Mining. These properties all lie on the prolific Battle Mountain-Eureka gold trend. Timberline also owns the Seven Troughs property, which is one of Nevada’s highest-grade former gold producers. Timberline has increased its controlled mineral rights in Nevada to over 43 square miles (24,500 acres). Detailed maps and NI 43-101 compliant estimated resource information for the Eureka property may be viewed at http://timberline-resources.co/.

Cautionary note to U.S. investors concerning estimates of resources: This press release may use the terms “resources”, “measured resources”, “indicated resources”, “inferred resources” and “measured & indicated resources.” We advise U.S. investors that while these terms are defined in and required by Canadian regulations, these terms are not defined terms under United States Securities and Exchange Commission (“SEC”) Industry Guide 7 and are normally not permitted to be used in reports and registration statements filed with the SEC. The SEC normally only permits issuers to report mineralization that does not constitute SEC Industry Guide 7 compliant “reserves” as in-place tonnage and grade without reference to unit measures. U.S. investors are cautioned not to assume that any part or all of mineral deposits in these categories will ever be converted into SEC Industry Guide 7 reserves.

Statements contained herein that are not based upon current or historical fact are forward-looking in nature and constitute forward-looking statements within the meaning of Section 27A of the Securities Act of 1933 and Section 21E of the Securities Exchange Act of 1934. Such forward-looking statements reflect the Company’s expectations about its future operating results, performance and opportunities that involve substantial risks and uncertainties. These statements include but are not limited to statements regarding a new, high-grade, gold exploration targets along the Oswego trend, expansion of targets, future drilling on all three of the Eureka trends, the existence of a robust gold system, advancement of exploration of the Oswego, Lookout Mountain, and Windfall trends employing Carlin-type gold deposit models, an initial drill program later this year at Oswego, exploration along the Oswego trend and the Oswego Road-Cut target being integrated with and capitalizing upon Timberline’s discovery experience at Lookout Mountain, completing a comprehensive review of the nearby Lookout Mountain gold resource area and assessing opportunities for expansion of mineralization previously discovered, advancing district-scale gold exploration and development projects in northern Nevada, ownership of two joint venture projects – the Paiute project joint venture with Barrick Gold, and the Elder Creek project joint venture with McEwen Mining, and increasing its controlled mineral rights in Nevada to over 43 square miles (24,500 acres). When used herein, the words “anticipate,” “believe,” “estimate,” “upcoming,” “plan,” “target”, “intend” and “expect” and similar expressions, as they relate to Timberline Resources Corporation, its subsidiaries, or its management, are intended to identify such forward-looking statements. These forward-looking statements are based on information currently available to the Company and are subject to a number of risks, uncertainties, and other factors that could cause the Company’s actual results, performance, prospects, and opportunities to differ materially from those expressed in, or implied by, these forward-looking statements. Factors that could cause or contribute to such differences include, but are not limited to, risks related to changes in the Company’s business and other factors, including risk factors discussed in the Company’s Annual Report on Form 10-K for the year ended September 30, 2017. Except as required by law, the Company does not undertake any obligation to release publicly any revisions to any forward-looking statements.