Eureka is a gold project located on the south end of Nevada’s Battle Mountain – Eureka Trend, and immediately south of the two-million ounce Archimedes / Ruby Hill mine complex. The project includes Timberline’s Lookout Mountain resource area along with a pipeline of earlier-stage targets that feature past gold production, historic gold estimates, and/or drill-indicated gold mineralization. Timberline acquired the Eureka property, including Lookout Mountain, in its 2010 acquisition of Staccato Gold. 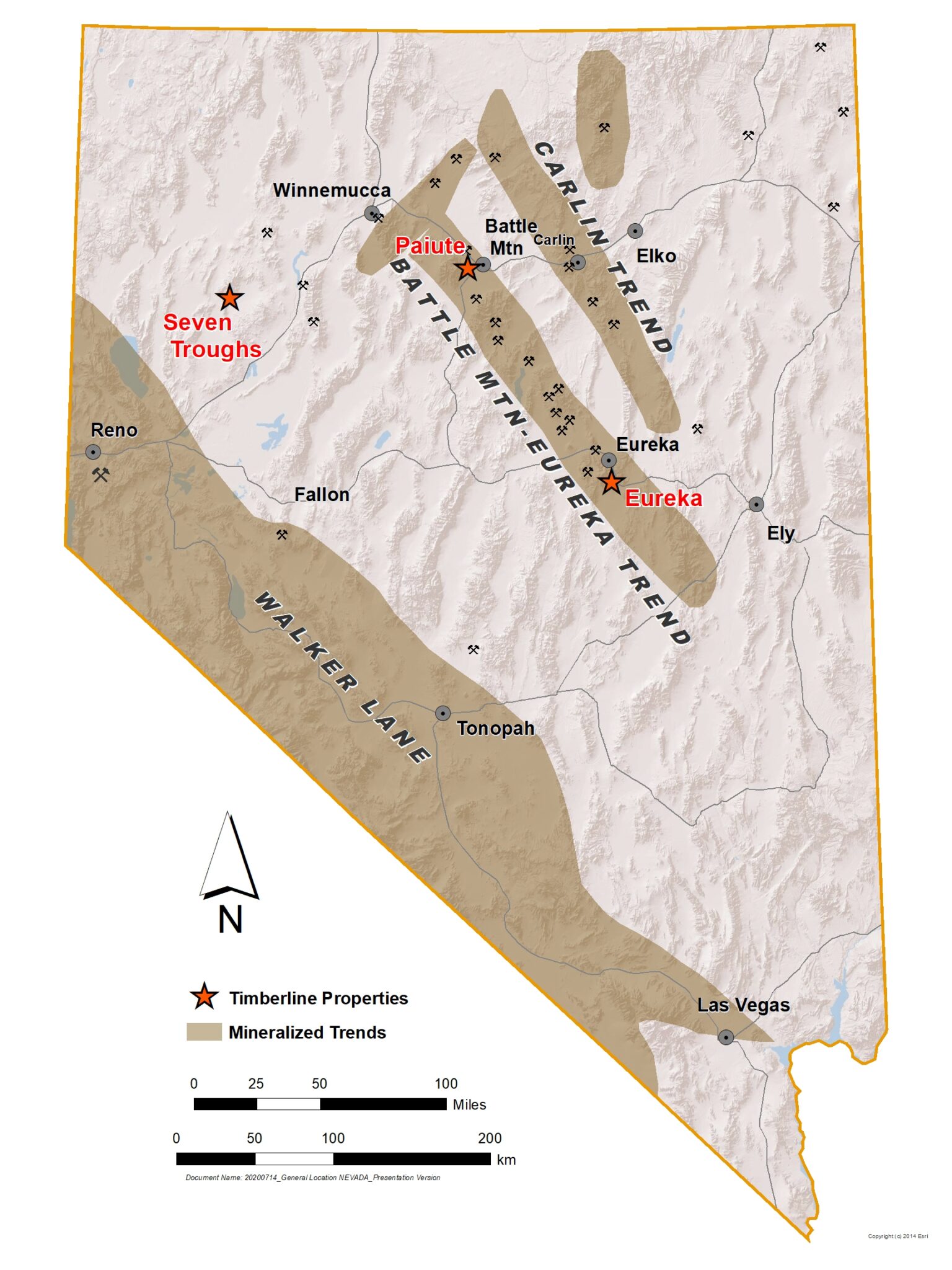 Location of the Eureka Property South of Eureka, NV, and the Ruby Hill/Archimedes Mine 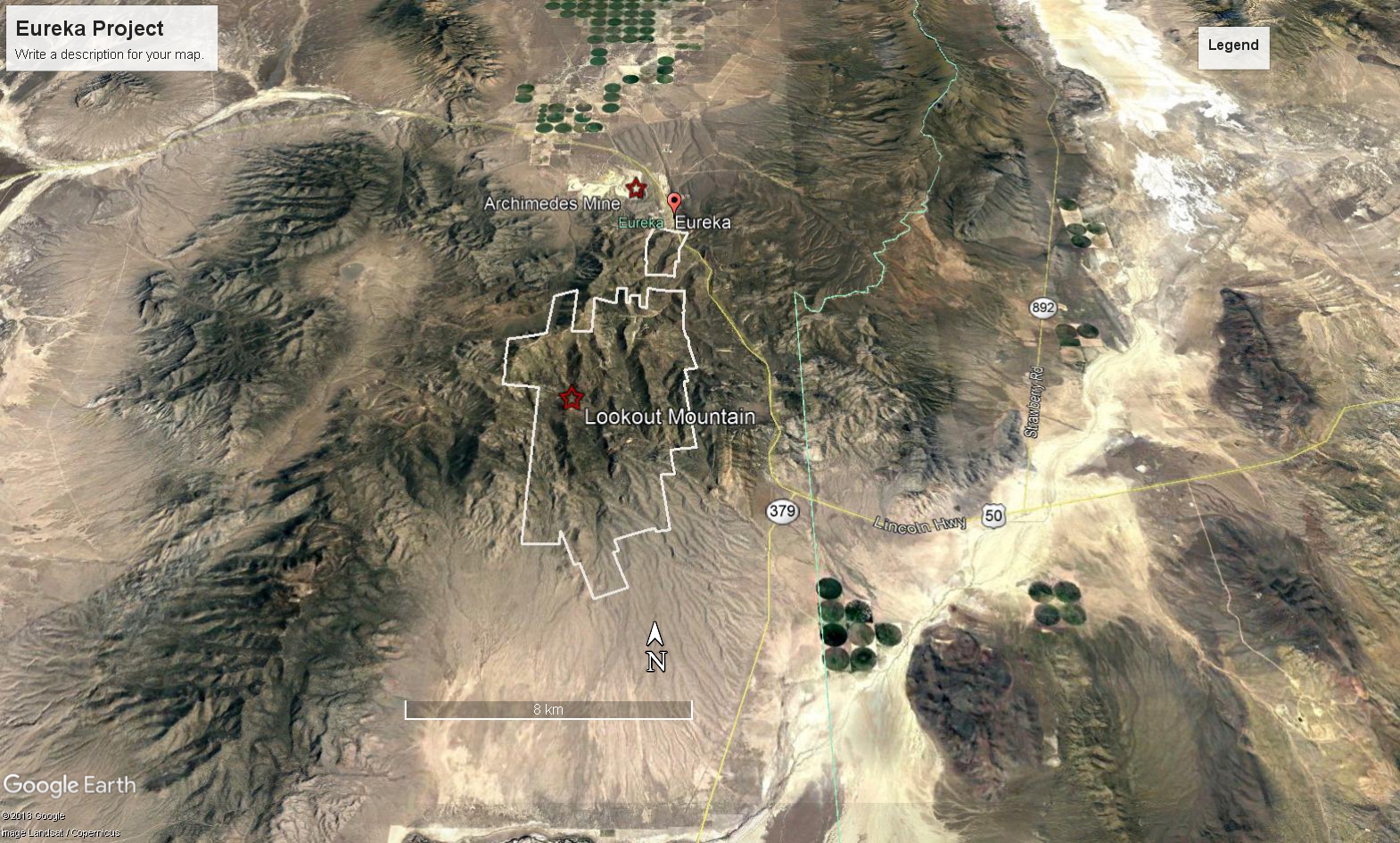 Gold mineralization at Eureka is of the Carlin-type, a class of gold deposits first identified and best known from Nevada where they may contain multi-million oz resources and/or reserves.  Timberline’s discovery to-date at Lookout Mountain includes an NI43-101 resource at Lookout Mountain and an associated high-grade zone, and several sites of drill indicated gold mineralization. 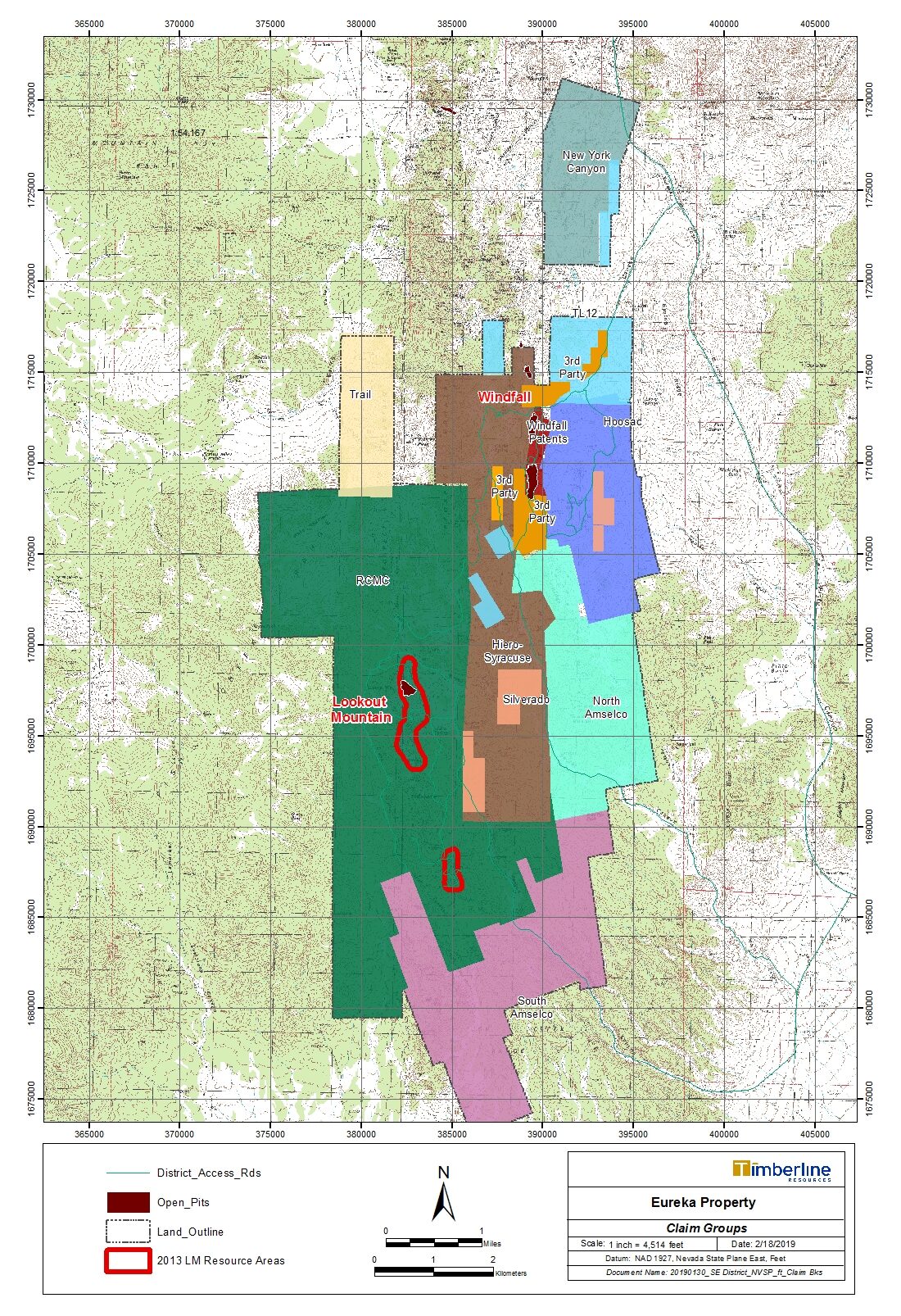 Replacement deposits of lead-silver-zinc-gold mineralization were discovered in the Eureka district in 1864 with substantial production primarily from 1870 to 1890. Gold mineralization that contained no base metals was discovered in 1904 at Windfall Canyon, about 3.5 miles northeast of Lookout Mountain. The Windfall-type mineralization differed from other mineralized bodies in the Eureka district in that it consisted of low-grade gold shoots with indistinct assay walls. After discovery of disseminated gold deposits in Nevada’s Cortez district during the 1960s, Windfall received renewed exploration interest in the gold-only mineralization, resulting in mining beginning in the early 1970’s with ultimate production of approximately 130,000 oz of gold from three aligned open pits. Follow-up exploration in the district into the 1980’s led to production of approximately 18,000 ounces from the Lookout Mountain open pit.

The Eureka district lies at the northern end of the Fish Creek Range and is underlain by a miles-thick sequence of Cambrian through Devonian sedimentary rocks that were affected by the Late Devonian to Early Mississippian Antler Orogeny. Tertiary volcanic rocks, and Mesozoic and Tertiary intrusions occur locally within the Eureka district. Rocks as young as Permian were deformed and cut by thrust faults, which themselves were deformed into a series of north-trending folds by compression that continued into Cretaceous time. Basin-range normal faults subsequently formed the present mountains and valleys.

The sedimentary rocks exposed in the South Eureka district are made up of limestone, dolomite, and minor amounts of shale and quartzite which total 14,500 feet in thickness in the Eureka area. A Cretaceous(?) pluton, as well as felsic dikes thought to be of Eocene age, intrude the sedimentary rocks. 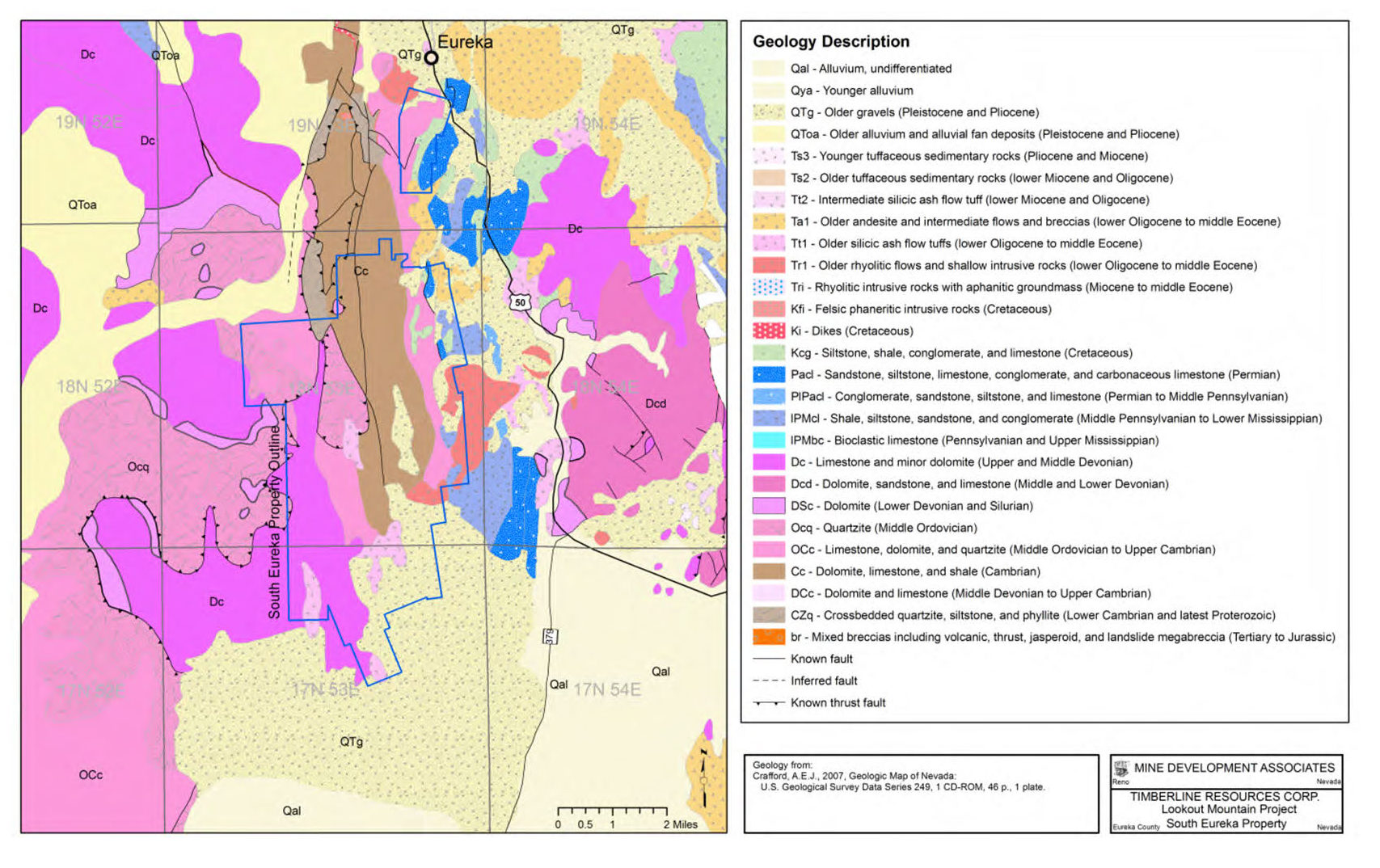 The lower Paleozoic calcareous rocks in the project area are complexly folded and faulted as part of a Paleozoic thrust system that places Cambrian rocks on top of Ordovician and Silurian rocks.

District-scale magnetic data at Eureka shows a north-south structural trend within the project area along with northeast- and northwest lineaments which correlate with faults.  In addition, a large (~3,000 ft diameter) strong magnetic-high is present north of the Lookout Mountain resource area, as well as a pronounced magnetic low, with internal highs, directly east of, but spatially associated with the Lookout Mountain gold resource. 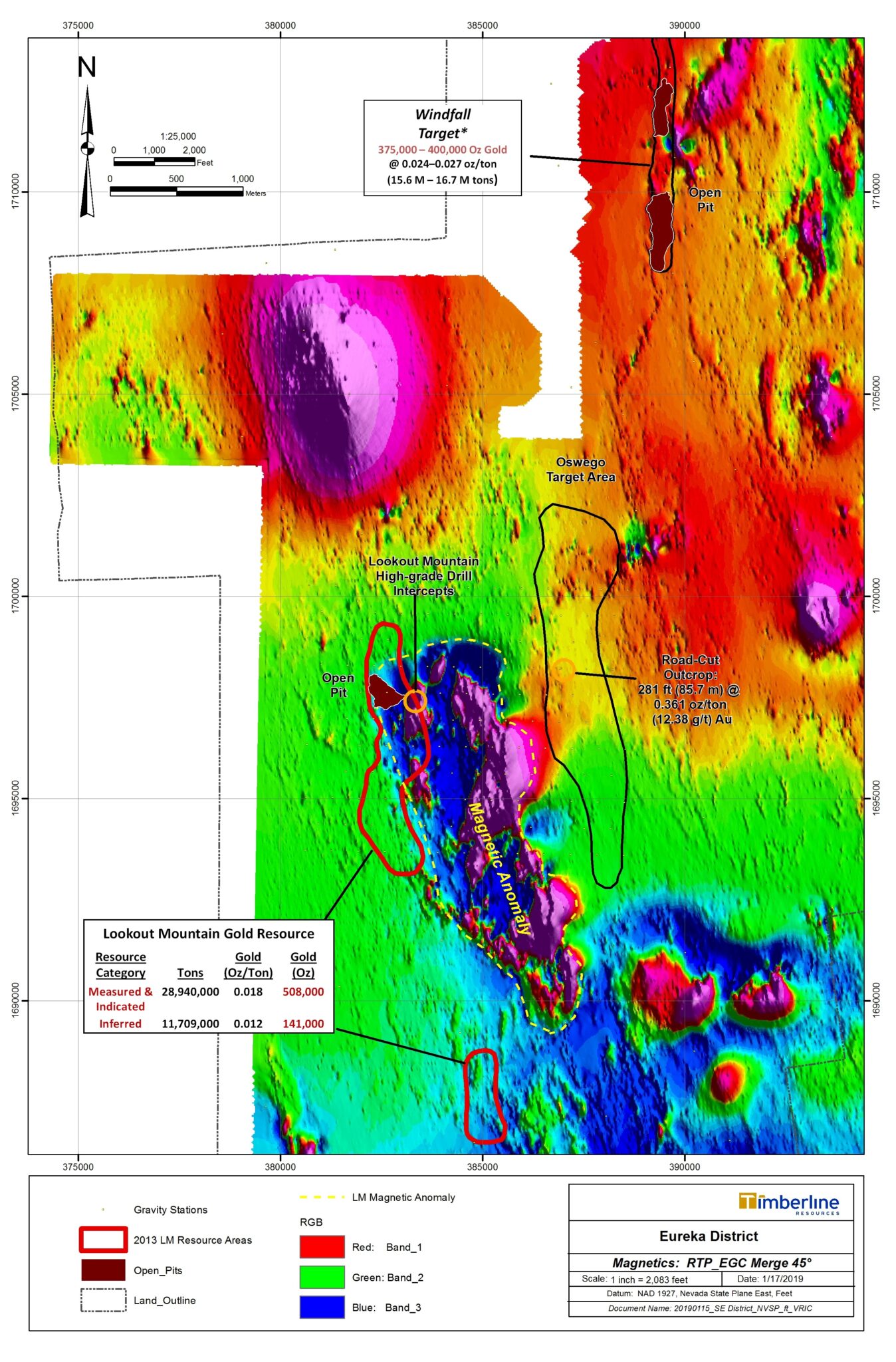 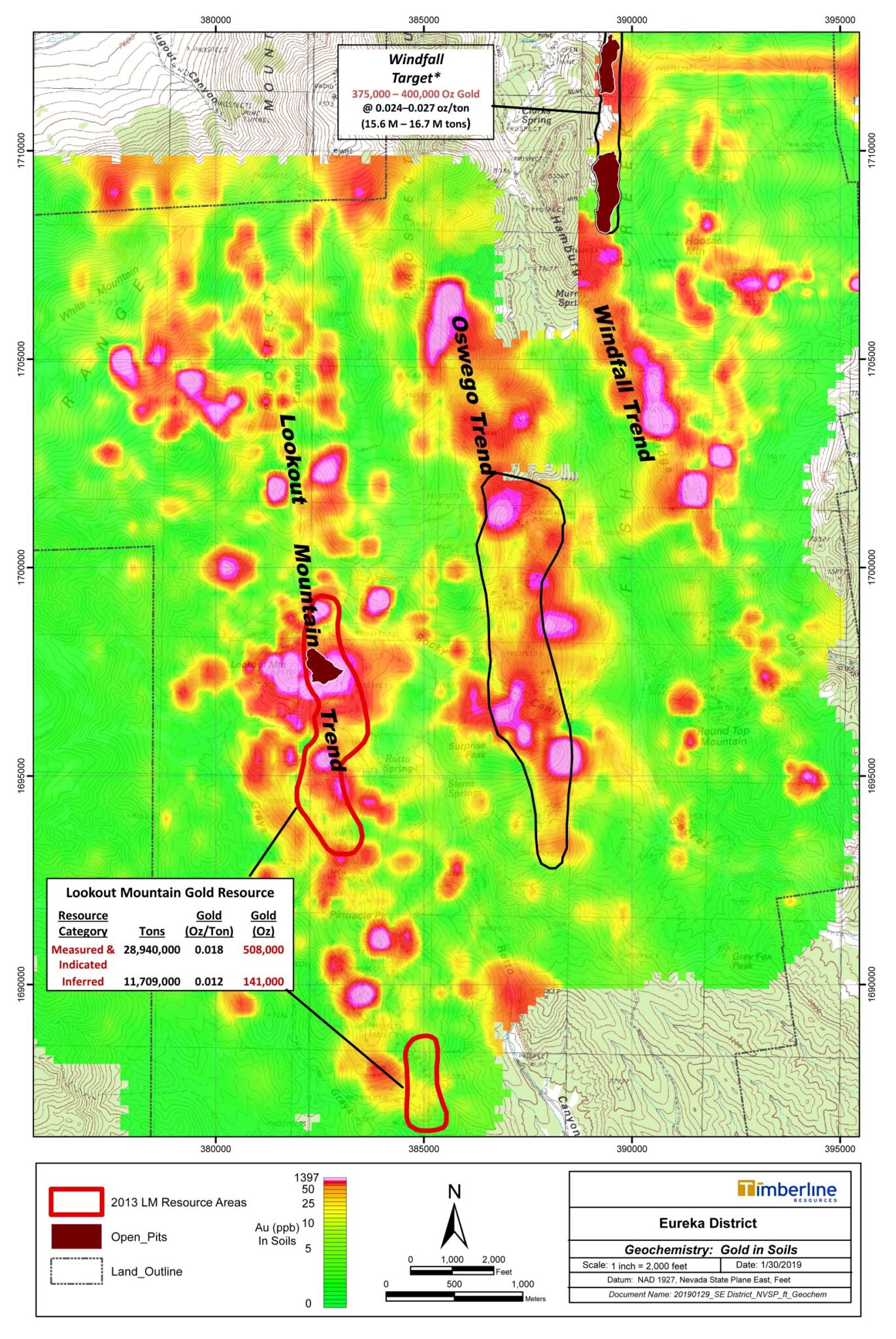