Timberline Reports More Gold and Silver from Drilling at the Eureka Project, Nevada

Coeur d’Alene, Idaho – November 9, 2022 – Timberline Resources Corporation (OTCQB: TLRS; TSX-V: TBR) (“Timberline” or the “Company”) is pleased to report more drill results from the 2022 drilling program at its 100%-controlled Eureka Project in Nevada. These five holes tested the northern limits of the Water Well Zone (WWZ) and exploration targets farther north (Figure 1). Four of the five holes were drilled with diamond core and one was a reverse circulation (RC) hole. In aggregate, these five holes constitute approximately 2,263 meters of the recently completed 6,662-meter drill program at Eureka.

Four of the five drill holes encountered significant gold mineralization, while two holes intersected significant silver-lead-zinc. Some important conclusions from these drill holes are: (1) confirmation that the Carlin-type gold system continues to the north of a major fault zone bounding the north of the WWZ; and (2) confirmation of silver-lead-zinc mineralization related to granitic intrusions (carbonate replacement deposits or “CRD” type) in the north Lookout – WWZ area.

Two of the holes (BHSE-221C and 238C) were offsets of BHSE-220C, which encountered significant thickness of high-grade gold (44.2m at 4.10 g/t Au, see Company news release dated March 24, 2022). BHSE-237C and 239C pushed north across the fault zone into younger Ordovician rocks, and BHSE-236 was a big step across the valley into a new target area based on high gold in surface sampling.

Some highlights from this phase of drilling are included below (using cutoff grades of 0.3 g/t for gold and 1.0 g/t for silver):

Patrick Highsmith, Timberline’s President and CEO commented, “These drill holes are our first test of the major fault zone that cuts through the northern part of the Lookout Mountain and Water Well deposits. One of the holes hit a nice zone of +3 g/t gold, as we have come to expect from the Water Well Zone. The overlapping Carlin type gold and older CRD silver mineralization is becoming an earmark of the Eureka Gold Belt, now in evidence at various places along more than 8km of the trend from i80 Gold’s Ruby Hill Mine in the north to the Water Well zone in the south. Drill hole BHSE-237C cut more than 200m of strongly enriched silver. We look forward to reporting more results from south Water Well Zone and the Oswego target during the fourth quarter.” 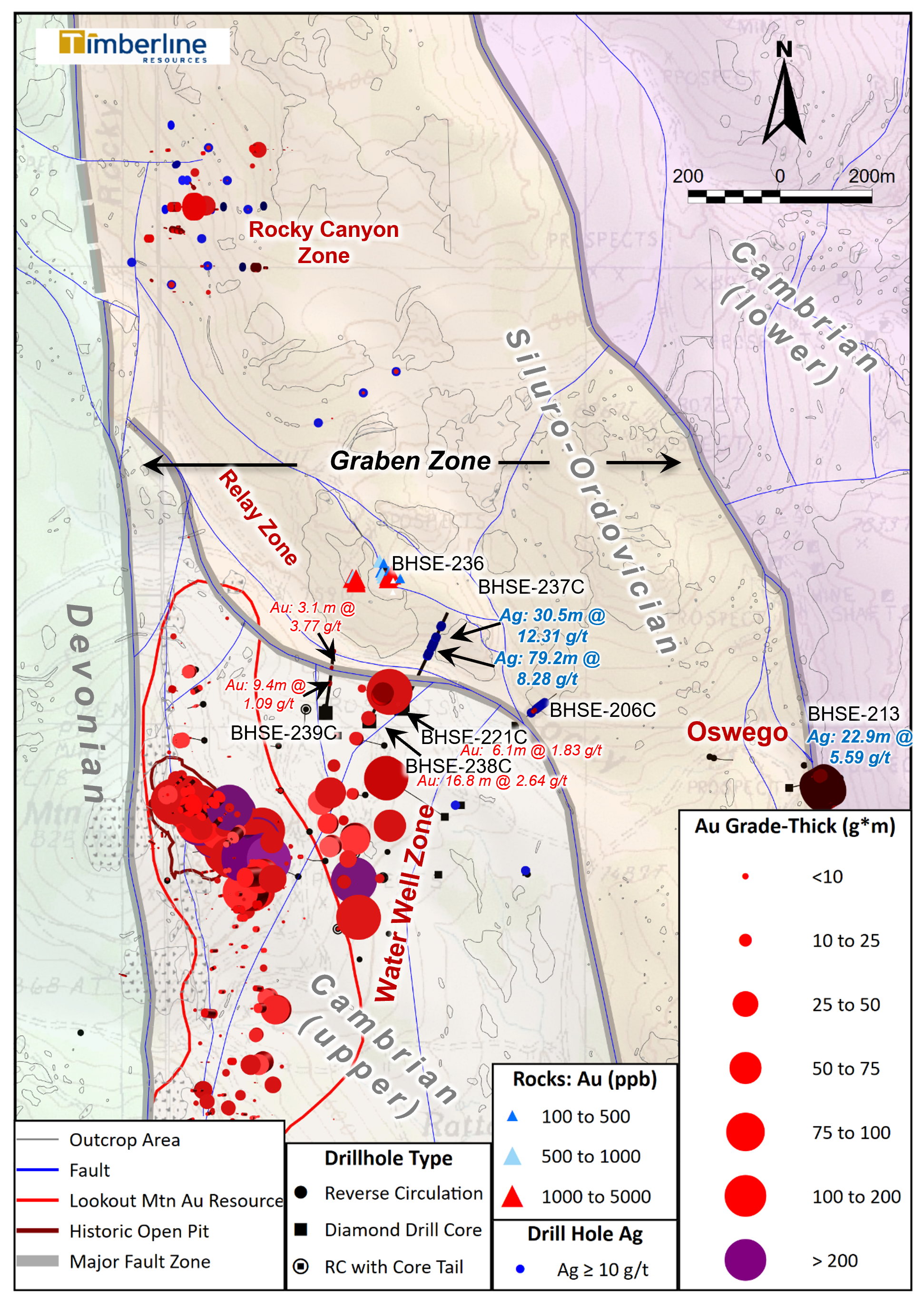 The four core holes were all collared in the northern part of the WWZ. Based on geologic mapping, geophysics, and limited drilling, Timberline geologists have been modeling a major fault zone, termed the Relay Zone, occupying the valley north of the WWZ (Figure 1).

The target horizon in the WWZ is the base of the Dunderberg shale, near its contact with the Hamburg formation. Drillholes BHSE-221C, 237C, and 238C were drilled to test the structures and thick gold zone reported from BHSE-220C. All three of these drill holes penetrated highly broken and sheared rocks of Cambrian and Ordovician age. The target horizon has been offset by faulting in this area, and in some cases the faulting has resulted in thinning of the Dunderberg and/or Hamburg formations. Hence, the gold mineralization encountered in these holes is generally thinner than expected.

The robust zone of gold mineralization in BHSE-238C occurs in a lower unit of the Dunderberg, and there is also gold mineralization in the upper Hamburg (up to 3.1 g/t over 1.5m). However, the hole continued downward through highly disrupted, sheared, and brecciated limestones and at least one porphyritic dike before terminating in carbonaceous limestone, likely to be Ordovician in age.

BHSE-237C cut a truncated section of Dunderberg shale that was only weakly mineralized before passing into more broken, sheared, and brecciated limestone. Below a likely fault zone, this hole also encountered multiple porphyritic dikes cutting altered, pyritic, and carbonaceous limestone. The altered limestone and dike material was host to the significant long runs of low and high grade silver with variable lead, zinc, and anomalous gold. Zinc and lead values exceed 1.0% in close association with sulfide veinlets but are generally in the hundreds or low thousands of ppm.

In addition to the major terrane-bounding fault zone that was likely penetrated by BHSE-237C, 238C, and 239C (shown in gray on Figure 1), drilling in this area also identified lesser faults (shown in blue) that break up and offset the Cambrian section in the WWZ. There is growing evidence that proximity to these faults may result in the highest grade and thickest gold zones in the Lookout and WWZ deposits. BHSE-220C cut almost 200 gram-meters of gold mineralization that appears to be associated with such faults, including a high-grade section of 12.2m grading 9.2 g/t (See Company news release dated March 24, 2022).

BHSE-221C was collared approximately 50m southeast from the high-grade hole, but it encountered a thinner section of Dunderberg characterized by extensive fracturing, shearing and other evidence of faulting. There was a narrow zone of gold mineralization in 221C, but it was not  as well developed as in the main body of the WWZ. Below that, the hole encountered weakly mineralized Hamburg and then passed into the underlying Secret Canyon formation. At the base of the Secret Canyon, associated with carbonaceous and sulfidic breccias, there was another horizon of gold mineralization (6.1m at 1.83 g/t gold). This is the first intercept of gold at the contact between the Secret Canyon and Geddes formations in the WWZ, but this horizon has long been believed to be an attractive host in the district.

BHSE-239C was collared well to the west from the known high-grade in the WWZ, and the resulting geology in the upper part of the hole is consistent with the downdip extension from the Lookout Mountain resource. There is a lower grade gold intercept in the predicted horizon at the base of the Dunderberg and the top of the Hamburg is weakly anomalous in gold. Below that there is evidence of shearing, faulting, and abundant carbonaceous breccias, some of which are associated with significant gold intercepts. There are also several quartz-feldspar-biotite dikes, having both porphyritic and equigranular (fine to medium grained) textures. The lower half of the hole is characterized by extensive disseminated fine-grained pyrite. These sections of breccia, faulting, and intrusive dikes with abundant pyrite may be part of the Ordovician section and may also host silver and base metal mineralization (multi-element assays remain pending at the time of this release).

Noteworthy in these drill results are the first confirmed significant gold intercepts in Ordovician rocks in this part of the Eureka Project. Ordovician host rocks, such as the Goodwin and Nine Mile formations, are important hosts at the Ruby Hill Mine to the north (i80 Gold Corp). Not only are some of the intercepts in BHSE-239C interpreted to be hosted in the Ordovician, but BHSE-236 is collared in Ordovician aged rocks and includes significant gold from surface (4.6m at 0.89 g/t). There is anomalous gold over broad intervals of limestone and dolomite, including 3.1m at 0.62 g/t gold at 407m depth.

Considerable work remains to be done in the Relay Zone as this RC hole is Timberline’s first drilling in the area. As shown on Figure 1, there is significant gold in surface sampling of silicified limestones (0.033 to 4.9 g/t in 19 samples). The recent drilling to the south and the historic drilling at the Rocky Canyon target (400m northwest) also indicate that the silver-rich CRD mineralization is widespread – another similarity to i80 Gold’s Ruby Hill – Archimedes complex.

Timberline cautions that proximity or similar geology to a project or past-producing mine operated by another company does not indicate that mineralization will occur on Timberline’s property, and if present, that it will occur in sufficient quantity or grade that would be economic to mine.

The summer drilling campaign has been completed, assays are awaited from RC and core drilling at the Oswego Target and south WWZ. Table 1 includes the location and orientation details of the drill holes reported here.

Cutting and sampling of core samples was directed by Timberline representatives. Personnel from Timberline or the drilling contractors transported the samples to Timberline’s secure Eureka facility, from which the samples were picked up by personnel from ALS USA Inc. (ALS) for sample preparation in Elko, Nevada or Tucson, Arizona. Quality control was monitored by the insertion of numerous blind certified standard reference materials, field duplicates, and blanks into each sample shipment. Drill samples were assayed by ALS for gold by fire assay of a 30-gram charge with an AA or ICP-ES finish (ALS code Au-AA23). The overlimits for gold samples assaying above 10 g/t were determined by a 30-gram fire assay with gravimetric finish. Satisfactory results were achieved for all quality control samples related to the data reported herein. In addition, gold mineralized samples were submitted for multi-element analysis (33 elements) by four-acid digestion and ICP-ES determination (code ME-ICP61).

Steven Osterberg, Ph.D., P.G., Timberline’s Vice President Exploration, is a Qualified Person as defined by National Instrument 43-101 and has reviewed and approved the technical contents of this release. Dr. Osterberg is not independent of the Company as he is an officer.

Timberline Resources Corporation is focused on delivering high-grade Carlin-Type gold discoveries at its district-scale Eureka Project in Nevada. The Eureka Property includes the historic Lookout Mountain and Windfall mines in a total property position of approximately 24 square miles (62 square kilometers). The Lookout Mountain Resource was reported in compliance with Canadian NI 43-101 in an Updated Technical Report on the Lookout Mountain Project by Mine Development Associates, Effective March 1, 2013, filed on SEDAR April 12, 2013 (see cautionary language below).

The Company is also operator of the Paiute Joint Venture Project with Nevada Gold Mines in the Battle Mountain District. These properties lie on the prolific Battle Mountain-Eureka gold trend. Timberline also controls the Seven Troughs Project in northern Nevada, which is one of the state’s highest-grade former gold producers. Timberline controls over 43 square miles (111 square kilometers) of mineral rights in Nevada. Detailed maps and mineral resources estimates for the Eureka Project and NI 43-101 technical reports for its projects may be viewed at https://timberlineresources.co/.

On behalf of the Board of Directors,