Steve Osterberg, Timberline’s President and CEO, commented, “The rock chip sampling along 760 m (2,500 feet) of the Windfall trend, combined with previously reported historic drill results (Press release dated July 10, 2018 at https://timberlineresources.co/press-releases), show the high discovery potential at Windfall. A substantial zone of oxide gold mineralization remains exposed at the surface and is open at depth and in both directions along strike (Figure 3).”
In addition, “grade – thickness” (gram-meter)(ounce-feet) calcualtions for drill hole intercepts (Figure 3 and Table 2) (see press release dated July 10, 2018 at https://timberlineresources.co/press-releases), and a review of cross-sections (Figure 4) indicate that gold mineralization remains unmined in the Windfall pit-area.

CONTROLS ON GOLD AND SILVER MINERALIZATION

The gold mineralized zone at Windfall occurs along a north-south structural trend (Figure 3) typically separating steeply-dipping Hamburg Dolomite Formation to the west, from moderate east-dipping Dunderberg Shale Formation to the east. Gold appears to be dominantly associated with brecciated dolomite adjacent to and between northeasterly and northwesterly trending cross-faults. Gold grade-thickness anomalies from historic drill hole intercept assays suggest similar structural control on higher-grade gold mineralization. The structures appear to focus gold mineralization within intensely bleached and “sanded”, variably brecciated Hamburg Dolomite Formation. Very limited silicificiation is evident in the rocks which likely relates to the reported historic excellent leachability of gold in the Windfall mine. 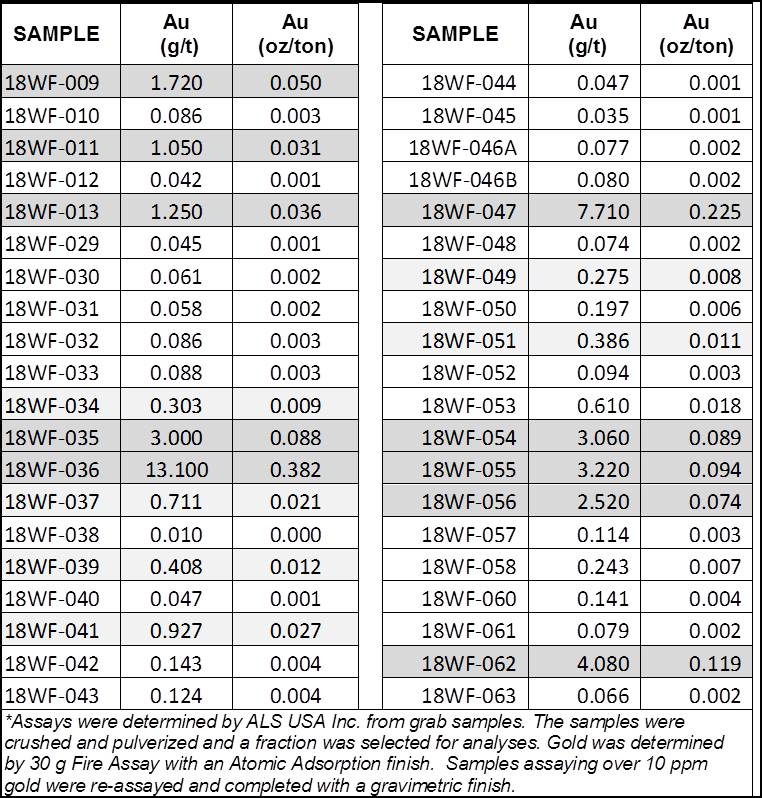 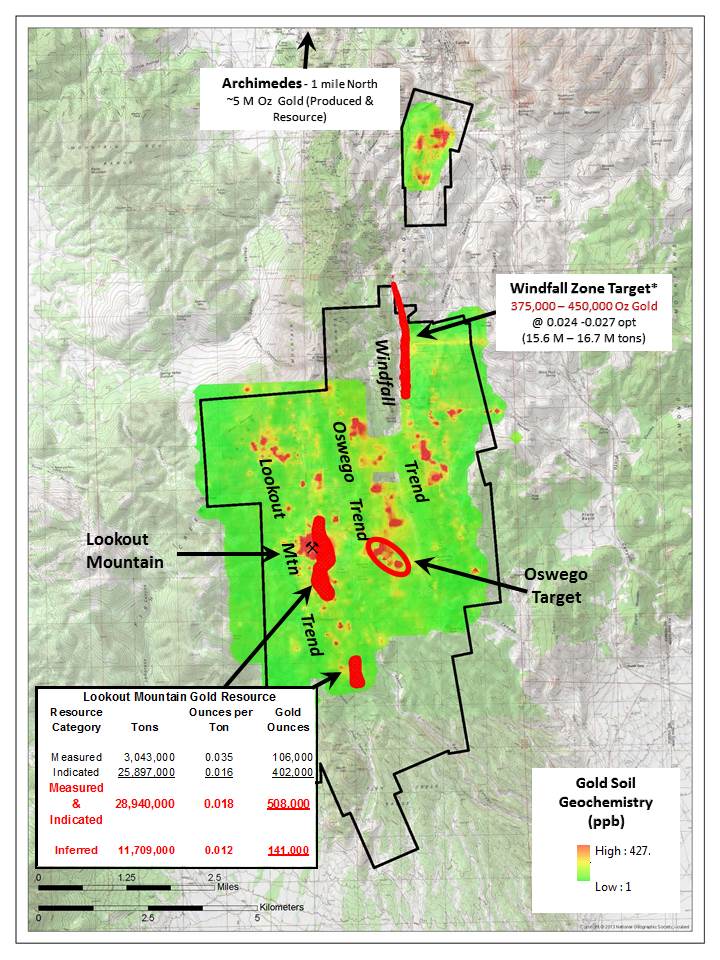 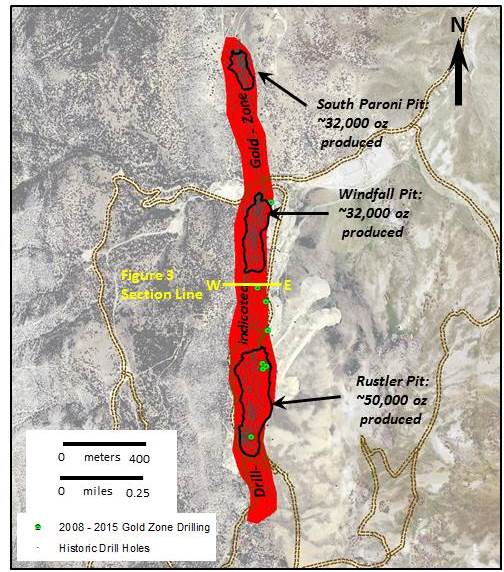 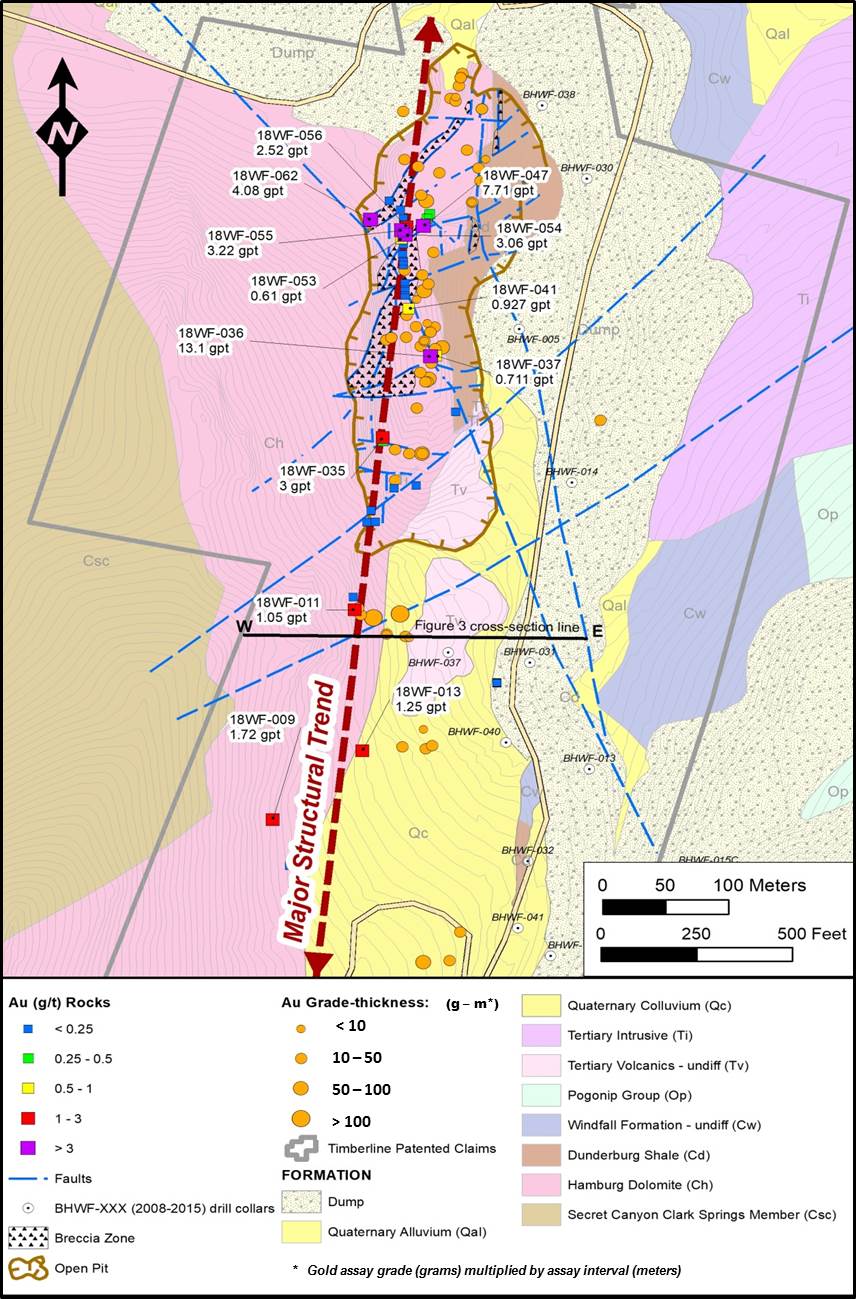 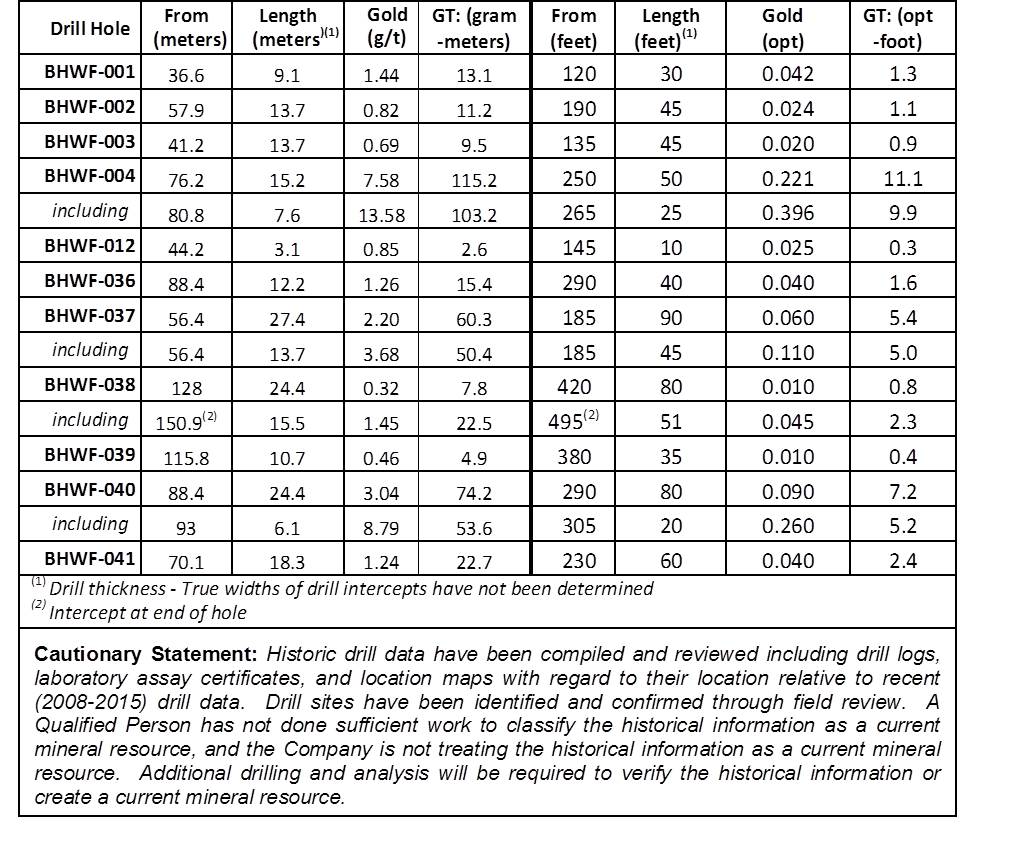 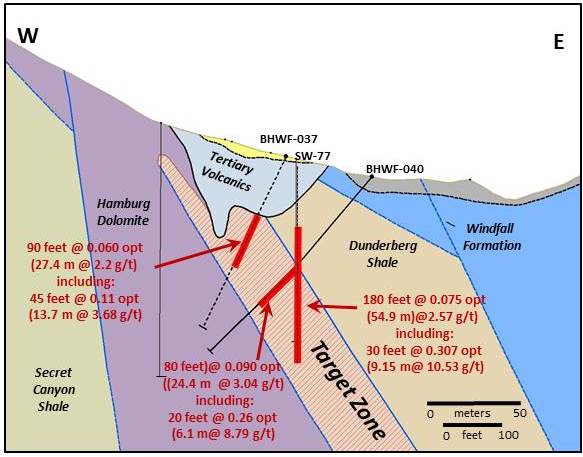 With completion of surface grab sampling results now available, along with compilation of recent and historic geologic and drill hole data at Windfall, the Company is finalizing initial drill targets designed to extend gold mineralization beyond the historic mining at Windfall. The anticipated target areas are located on patented claims owned by Timberline and are fully permitted for drilling.

Further technical details of the Company’s Eureka project project may be viewed at: https://timberlineresources.co/projects/Eureka-nevada/.

Timberline Resources Corporation is focused on advancing district-scale gold exploration and development projects in northern Nevada. These include: the 23 square mile Eureka property, comprised of the Lookout Mountain, Windfall, and Oswego areas, which lie along three parallel, north-south gold-mineralized structural stratigraphic trends defined by distinct geochemical gold anomalies; and as the expected operator of two joint venture projects – the Paiute project joint venture with a subsidiary of Barrick Gold, and the Elder Creek project joint venture with McEwen Mining. These properties all lie on the prolific Battle Mountain-Eureka gold trend. Timberline also owns the Seven Troughs property, which is one of Nevada’s highest-grade former gold producers. Timberline has increased its controlled mineral rights in Nevada to over 43 square miles (24,500 acres). Detailed maps and NI 43-101 compliant estimated resource information for the Eureka property may be viewed at http://timberline-resources.co/.

Cautionary note to U.S. investors concerning estimates of resources: This press release may use the terms “resources”, “measured resources”, “indicated resources”, “inferred resources” and “measured & indicated resources.” We advise U.S. investors that while these terms are defined in and required by Canadian regulations, these terms are not defined terms under United States Securities and Exchange Commission (“SEC”) Industry Guide 7 and are normally not permitted to be used in reports and registration statements filed with the SEC. The SEC normally only permits issuers to report mineralization that does not constitute SEC Industry Guide 7 compliant “reserves” as in-place tonnage and grade without reference to unit measures. U.S. investors are cautioned not to assume that any part or all of mineral deposits in these categories will ever be converted into SEC Industry Guide 7 reserves.

Statements contained herein that are not based upon current or historical fact are forward-looking in nature and constitute forward-looking statements within the meaning of Section 27A of the Securities Act of 1933 and Section 21E of the Securities Exchange Act of 1934. Such forward-looking statements reflect the Company’s expectations about its future operating results, performance and opportunities that involve substantial risks and uncertainties. These statements include but are not limited to statements regarding: new, high-grade, gold mineralization at Windfall, plans to conduct additional drilling in support of an initial open-pit oxide resource study, high discovery potential at Windfall, gold mineralization remaining unmined in the Windfall pit-area, initial drill targets designed to extend gold mineralization beyond the historic mining at Windfall, anticipated target areas located on patented claims, advancing district-scale gold exploration and development projects in northern Nevada; ownership of two joint venture projects – the Paiute project joint venture with Barrick Gold, and the Elder Creek project joint venture with McEwen Mining; and increasing its controlled mineral rights in Nevada to over 43 square miles (24,500 acres). When used herein, the words “anticipate,” “believe,” “estimate,” “upcoming,” “plan,” “target”, “intend” and “expect” and similar expressions, as they relate to Timberline Resources Corporation, its subsidiaries, or its management, are intended to identify such forward-looking statements. These forward-looking statements are based on information currently available to the Company and are subject to a number of risks, uncertainties, and other factors that could cause the Company’s actual results, performance, prospects, and opportunities to differ materially from those expressed in, or implied by, these forward-looking statements. The Company’s earn-in to the Elder Creek project joint venture has not yet closed, there are a number of conditions precedent to such closing, and there are no assurances that the Company will complete the earn-in as contemplated or at all. Factors that could cause or contribute to such differences include, but are not limited to, risks related to changes in the Company’s business and other factors, including risk factors discussed in the Company’s Annual Report on Form 10-K for the year ended September 30, 2017. Except as required by law, the Company does not undertake any obligation to release publicly any revisions to any forward-looking statements.